If you know me, you will know I like to try new crafting projects once in a while, so one afternoon while browsing Pinterest I'd come across several pictures of resin jewelley that had been made with Glossy Accents.

I was intrigued in how they made the jewellery and I thought this would be my chance to make resin jewellery, which I have always wanted to make. So popped into my local craft shop, luckily they had a bottle in stock, which I bought.

You might be sitting there thinking, 'what is Glossy Accents', well Glossy Accents is a 3-dimensional clear gloss medium, used by crafters and it can be used to accent, brighten, magnify, dimensionalize, bond and protect embellishments and designs.

Phew, that was a mouthful and if you wondering yes, I did just copy that description off the back of the bottle. Basically, it's a type of resin that you pour straight from the bottle and you can add it to any paper project or embellishment. It dries to a clear hard shiny finish and also doubles a glue! 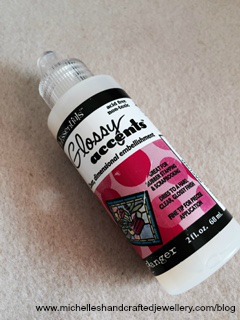 In some of the projects that I have seen using Glossy Accents, the makers have used bottle caps, but I did not have any, however I did have some pendant trays that I'd bought a while ago. I'd not used them, because I'd had trouble finding any clear glass domes to fit them, as they were not a common available size.

So I'd given up in looking for the domes and just put them away in a draw. When I saw what could be done with a bottle of Glossy Accents, I straight away thought about my unused pendant trays and what I could do with them.

I found a background image that I wanted to use and cut into an oval shape. I then sealed the front and back of it with PVA white glue, which is your ordinary white gllue that you can get in any craft shop. I did this twice, each time waiting for the glue to be completely dry before I added the next coat.

After the final coat, the image was ready to be glued to the back of the inside of pendant tray. For this I used E6000 glue, which smell very strong, make sure the room is well ventilated when you use it, but it is what I call jewellery cement, once you use it, nothing moves, it dries rock hard.

I left this to dry overnight then, the next day I was ready to fill the tray with the Glossy Accents. I'd noticed in pictures of resin jewellery, the makers sometimes added a small object to their pendant tray, I had a small silver key on my desk and I decided to put the key in the tray before I poured in the Glossy Accents. 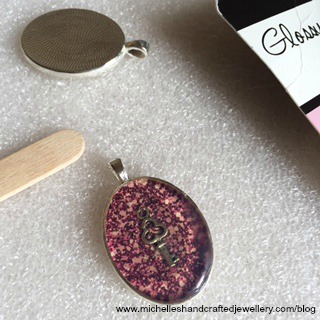 I filled the tray to the edge, then left it to cure over night. The next morning, I noticed that it had set, but it looked a little sunken around the key. So I thought it could not do any harm to add some more Glossy Accents to fill up the tray, so that it looked more level. When I filled up the tray the first time, I remembered to leave it on a level surface, but this time don't ask me why, I decided to put it in another place.

Little did I know, but this place was not as level as I thought it was and the tray ended up leaning slightly to one side. The Glossy Accents had spilt slightly over the edge and some of it had seeped underneath! 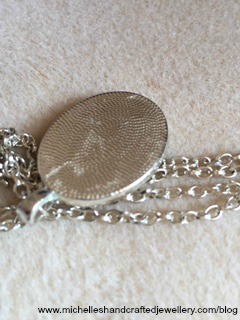 How could I have been so careless, I could have kicked myself for not paying more attention to what I was doing. I managed to scrape some of the Glossy Accents off, but you can still see some of it on the back of the pendant tray.

I learnt a lesson that you should take your time and not change the way you perform certain tasks, unless you want the results to be different. If you don't want change, then don't change a thing and that's my quote for the day!

I still like the pendant, I popped it on a chain and have been wearing it and I've have had some lovely complements about it. I've still got a near full bottle of Glossy Accents and some more of those pendant trays, so I will be making some more pendants in the near future. 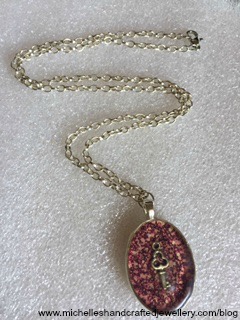